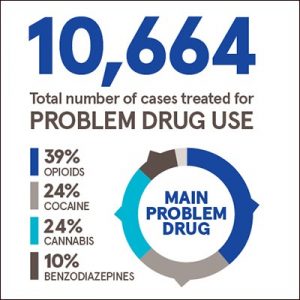 Opioids remain the most common drug among cases treated for problem drug use for the first time. However, cocaine has overtaken cannabis as the second most common drug that people enter treatment for.

‘The figures published today illustrate the level of cocaine use in Irish society. The consistent rise in demand for cocaine treatment, coupled with an increase in cases in paid employment and a decrease in proportion of cases mixing drugs reflects clear changes in patterns of drug use.

‘In general, those seeking treatment for cocaine are male, 30 years of age, in paid employment and most likely to use alcohol as an additional drug. However, a rise in reporting of crack cocaine is a worrying trend where cases with chronic problem drug use, mix crack cocaine with opioids. These cases are more likely to be unemployed and homeless. It is important that this distinction is noted in order to monitor trends and tailor treatments accordingly.’

‘Polydrug use, or using more than one drug, remains a problem for more than half of cases presenting for treatment. It should be noted that there has been an overall decline in the proportion of treated cases who are taking more than one drug since 2013. A downward trend in the proportion of polydrug cases is positive, because mixing drugs increases the risk of overdose and can impact recovery,’ concludes Dr Carew.

Key findings on drug treatment in 2019

Polydrug use (problem use of more than one drug)

The full report is available on the HRB website. An infographic that outlines key data is also available for download.

For further information, infographics or to organise interviews with experts, please contact:

The Health Research Board (HRB) is the lead agency supporting and funding health research in Ireland. We manage four health information systems in the areas of alcohol and drug use, drug deaths, disability and mental health and generate evidence to inform health policy. Our aim is to improve people’s health, build health research capacity and underpin developments in health service delivery.